For open channel flow use the Chezy-Manning equation:

There are many components used in the collection of stormwater some examples include:

Culverts: A pipe carrying water under or through a feature. Culverts often carry brooks or creeks under roadways. Culverts must be designed for large intensity storm events.

Gutter/Street flow: Flow which travels along the length of the street or gutter.

Storm Sewer Pipes: Pipes installed under the road which carry the water from inlets to a suitable outlet.

The principle of Conservation of Flow is often applicable when analyzing drainage. It states that the flow in must equal a flow out and therefore:

Duration: The length of time of a storm. Often measured in days and hours.

Total Volume: The entire amount of precipitation throughout the duration of the storm in a defined area.

Hydrograph – Graphical representation of rate of flow vs time past a given point often in a river, channel or conduit

Parts of a Hydrograph are shown graphically:

The rational method can be used to determine the flow rate from runoff of a drainage area. The equation is:

For total flow from multiple areas to a single outlet the conservation of flow principle is applied and the total is the sum of all flow into the outlet.

Time of Concentration, tc: The time of travel for water to move from the hydraulically most remote point in a watershed to the outlet. The time of concentration is the sum of three components:

For approximately the first 300 ft, water moves as sheet flow: 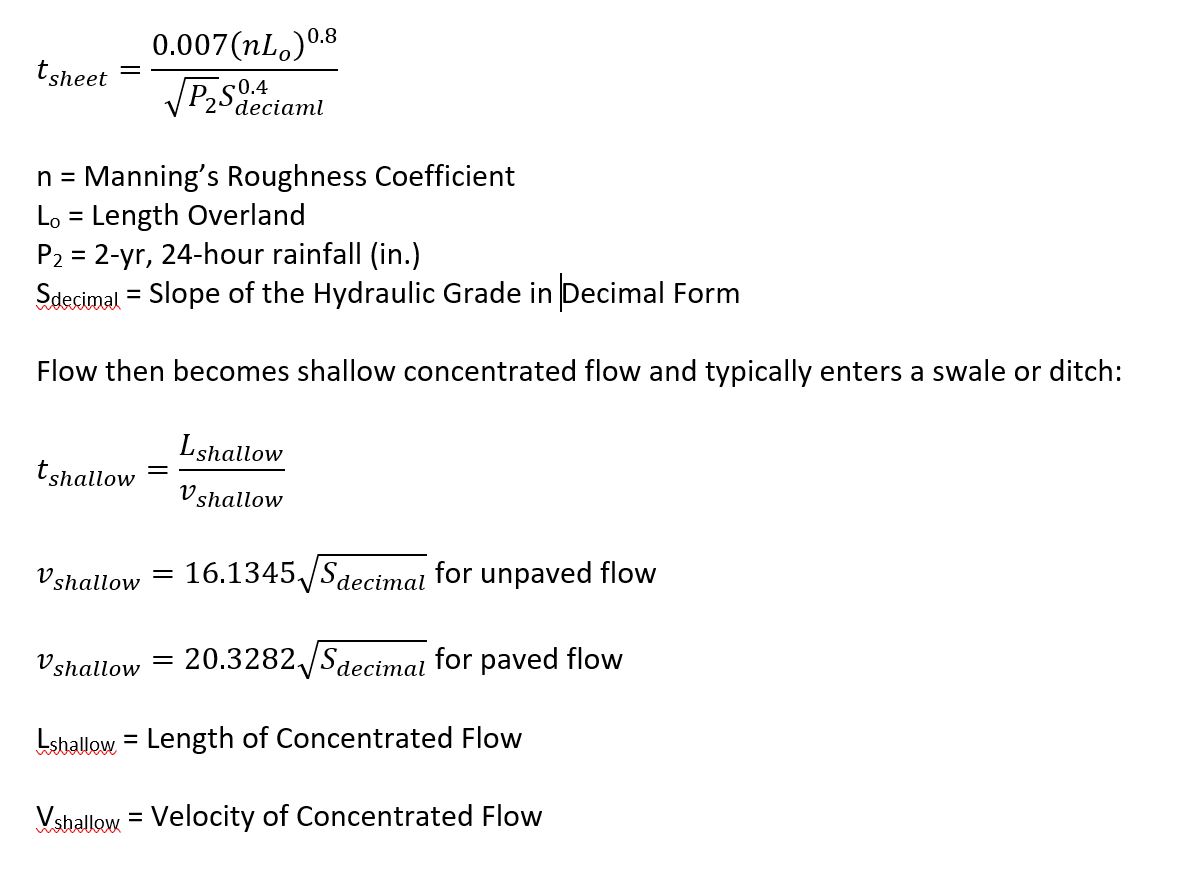 This is an alternative method for determining runoff:

Detention Ponds: Also known as dry ponds. These are ponds which are often kept dry except during flood events. The pond will fill up during increased precipitation to control the flow intensity. This is common in dry, arid or urban areas to prevent excessive flooding. The ponds typically will be designed to hold water for about 24 hours. Detention ponds also controls the amount of sediment since it is captured in the pond and then typically becomes accessible after the pond has dried.

Retention Ponds: Also called wet ponds since they contain a volume of water at all times. The elevation of the water will vary depending on precipitation but will always maintain a permanent amount of water based on low flow conditions. This allows sediment control since the deposits will settle to the bottom and allow for collection.

The Darcy Equation is used for fully turbulent flow to find the head loss due to friction. The equation is:

The Bernoulli equation for the conservation of energy states that the total energy is equal to the sum of the pressure + kinetic energy + potential energy and is conserved at any point in the system. Therefore: